This book is about God's solid and powerful plan to bring salvation to all people ... and how the Christian can be part of that great plan.

Chapter 1 is considered by many to be possibly the best passage in the Bible when it comes to showing God's sovereign choice of the Christian and what the purpose of the Believer's life should be.
In other words - why are we Christians?  What is the goal of being a Believer?
This is the wonder of God's grace and the pattern of life that the Gospel will do to us.

VERSE 1:   Paul, an apostle of Christ Jesus by the will of God, To the saints who are at Ephesus and who are faithful in Christ Jesus:

Some manuscripts don't even have "Ephesians" in it, meaning that this is encyclical; it was to be passed around to many churches.  This has a wide application to all churches. This was a capital city, with a large population, with roads going right through this region,(including Paul).  It was often called the "Mother City of Asia".  It was known to have a lot of religion, such as Artemis and Diana.  It is located int he western region of present-day Turkey.  People could get to Ephesus by boat or by land; a very continental city.  It's about 80 miles from Laodicea. 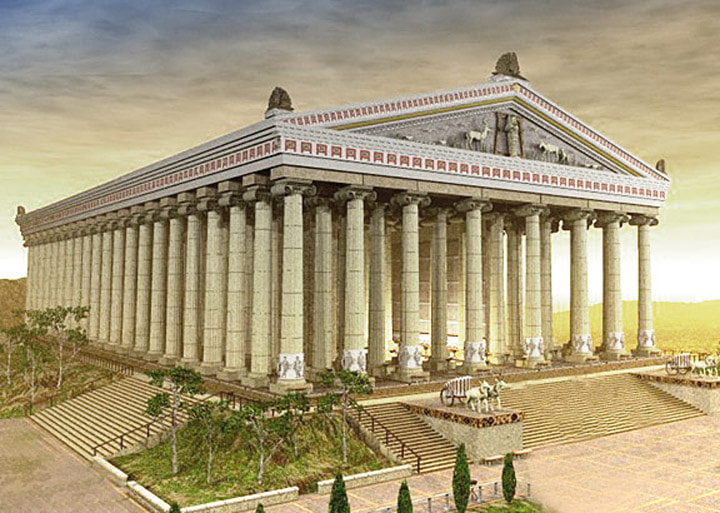 THIS WAS THE ANCIENT TEMPLE OF ARTEMIS, A HUGE TESTIMONY TO RELIGIOUS ACTIVITY IN THE REGION source: daydream tourist
Paul first got here around 52 AD and on his third journey he stayed 2 years.  He wrote this around 60 AD while in prison in Rome.  This was written after he wrote the book of Colossians.
What is the purpose?  God's grace to sinners.  In fact, His grace is so great that He shows grace that leads us to be the body of Christ - a solid unity - whether the Christian is Jew or Gentile.  No matter what culture, there is a spiritual connection and interaction if we are in Christ.
VERSE 4:   "just as He chose us in Him before the foundation of the world, that we would be holy and blameless before Him. In love He predestined us to adoption as sons through Jesus Christ to Himself, according to the kind intention of His will..."

This letter doesn't start out with imperatives.  This letter emphasizes praise to God.

Nearly 40 times he writes that we are "in Christ".  We see the glories of our spiritual blessings.